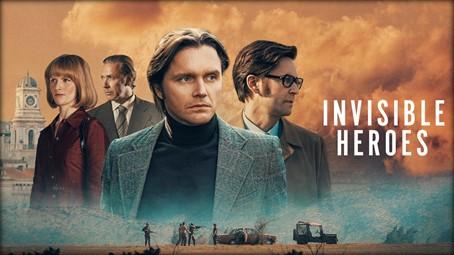 Santiago de Chile 1973. Political unrest shakes the country. On September 11th a coup d'état takes place. The military takes over the state leadership. Political activists and their supporters are persecuted. International embassies find themselves in a critical position in the midst of the Cold War. The official policy is to remain neutral and to stay out of conflict. Political refugees from Chile are not to be helped. This is also the position of the Finnish government. However, the diplomat Tapani Brotherus and his wife Lysa decide to help the politically persecuted, allowing them to leave for Europe. A race against the dictatorship under formation begins.

In the historical-fictional series Invisible Heroes, the work of Tapani and Lysa Brotherus is staged. Amid the military coup and the establishment of the dictatorship under General Augusto Pinochet, they welcomed politically persecuted people into their home and ultimately made their departure possible. Reportedly, up to 2,500 people managed to flee Chile as a result. Since Finland did not accept political refugees and asylum seekers, diplomats sought other ways. Since socialists, communists and Allende supporters were persecuted under the military dictatorship, the foreign mission of the German Democratic Republic was also under fire. Finland offered to act as a protectorate, which meant that the GDR embassy, as well as the GDR citizens in Chile, were under Finnish protection. The GDR showed itself willing to take in about eighty percent of the refugees.

The series is a Finnish-Chilean co-production and aired in Chile in September 2020 on the channel Chilevisión. The first two episodes were shown shortly before the 11th of September, the anniversary of the military coup against Salvador Allende. The plot is based on the book Kuoleman listat - Suomalaisten salainen apu Chilen vainotuille (“Death lists – The Finnish secret aid to persecuted Chileans”) by the political scientist Prof. Dr. Heikki Hiilamo. The historical facts depicted in the series were supplemented, dramatized, and elaborated to weave them into an arc of suspense, thus ultimately making them suitable for viewers. The series' introduction, in which original footage from the Archivo Nacional de Chile is mixed with scenes from the series, is paradigmatic for the historical-fictional genre.

The series skillfully manages to balance the treatment of history and entertainment with a strong arc of suspense. Classic images of events, such as the commemorative march for Pablo Neruda and the bombing of the Palacio de la Moneda, are incorporated into the series, creating a memorable overall image with recognition value. Invisible Heroes can be considered as a telenovela de la memoria since most of the audience remembers the military dictatorship in Chile. The production revives memories through this process.