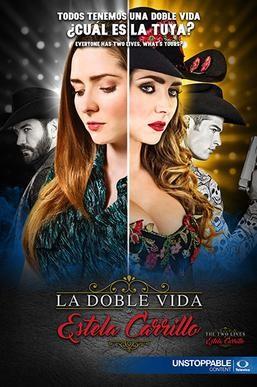 The telenovela La doble vida de Estela Carrillo is about a young woman who fled to the United States with her daughter. Her dream was always to sing regional Mexican music. In Mexico, she fell into the hands of a human trafficker who promised to make her famous. By illegally escaping to the USA, she can free herself from him. In the U.S. she buys a false identity and from now on lives under the name Estela Carrillo. Through social networks, Ryan Cabrera becomes aware of her and asks her to testify for him in a murder trial. His wife Estela Carrillo is considered missing. She agrees and from now on lives in the dichotomy of not being able to tell the truth for fear of being deported to Mexico and losing the safe life of the U.S. for her and her daughter.

The Mexican telenovela is based on true events and tells the life of the "fake" Estela Carrillo in 72 episodes. It can be classified as a "fictional reality" telenovela. It deals with the themes of illegal migration, violence against women, the pursuit of the "American Dream" and the dichotomy of living between two worlds: a reality that countless Latinos and Latinas living illegally in the United States share with Estela Carrillo from the telenovela. Producer Rosy Campo says in an interview that the story is based on true facts. It is about the life of a woman who aspires to a better life and, due to various circumstances, goes to the United States and must change her identity there. The producer says that La doble vida de Estela Carrillo is a modern telenovela that takes up current issues and corresponds to the genre of telenovela with the love relationships and intrigues.

The telenovela has been nominated for several awards, including Best Screenplay of a Telenovela in Spanish and Best Acting Performance.